The diminished seventh chord (o7) is one of the most exotic and beautiful harmonies that equal temperament has to offer. This chord type has a completely symmetrical structure. It is constructed of 3rds, but it is the only seventh chord in which all of the thirds are of the same size. This makes it something of an anomaly in the asymmetrical environment of the major/minor key system.1

Taking C as the root note gives us:

If we now build a chord by stacking 3rds from the leading tone we get the Bo7 chord. 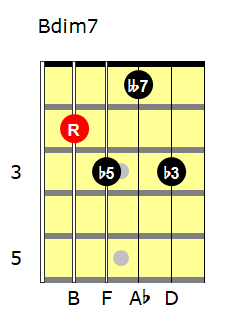 Note that the Ab in relation to the B root could be said to be a major 6th but it is more correctly termed a diminished 7th (sometimes notated as bb7).

When used in the context of a major key diminished chords have three typical uses:

Note that diminished substitutions are typically used to play a chord one semitone above (when descending) or below (when ascending) a target chord (the chord we want to move to).

Its origin as a leading tone chord in minor key means that a diminished seventh chord can be used in place of a dominant seventh chord in a progression to achieve the same functional result. It acts as VIIo7 of the target chord.2

The Berkley Book of Jazz Harmony provides guidance on when the diminished 7th chord can be used as a substitute for a  secondary dominant. It deals with 4 specific cases:

Take a look at the second use of a diminished 7th chord in the chart below. Here we can see that the progression is moving from the V7 chord (G7) to the VI chord (Amin7). In between the 2 chords is G#o7. This is an example of the first case cited in the The Berkley Book of Jazz Harmony; V7/VI being replaced by #Vo7. In this case the secondary dominant of Amin7 would be E7 but we replace it with G#o7.

Why does this work? If you take G#o7 and add an E in the bass you end up with an E7b9 chord! In other words there is a clear relationship between G#o7 and E7b9 (and o7 and 7b9 chords in general).

Mark Lavine in his book The Jazz Theory Book states,

He goes on to say,

Whenever you come across a diminished chord in a tune, check to see if the root is part of a chromatic bass line. Then check whether it is equivalent to the dominant 7th b9 chord a 5th above whatever chord comes next.4 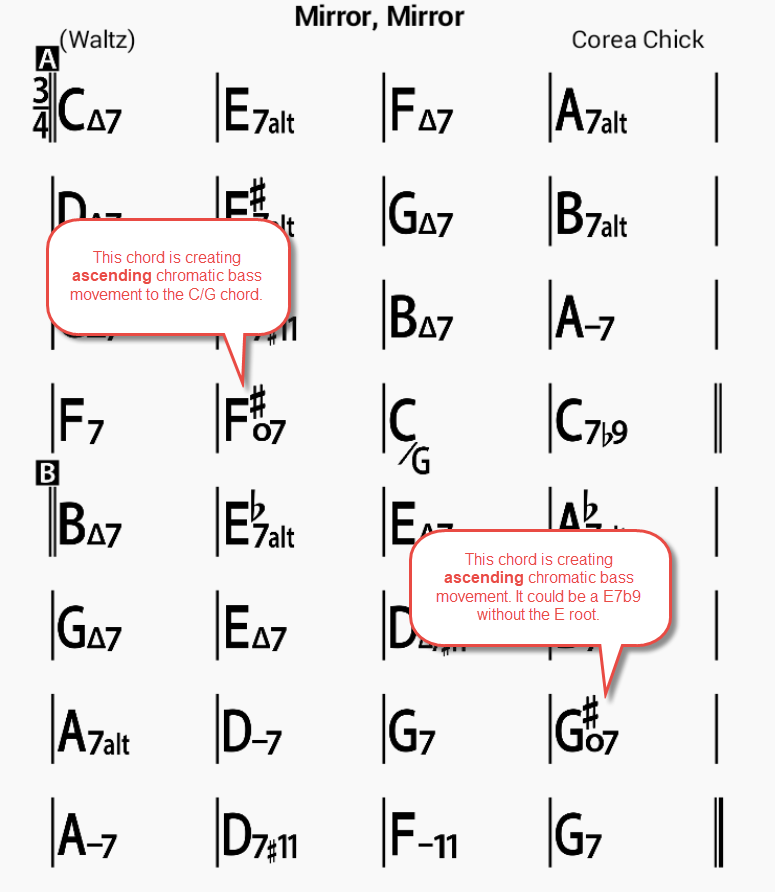 So what about the first use of a diminished 7th chord in the progression above? Well, it turns out this is a use of the 4th type of substitution cited in the The Berkley Book of Jazz Harmony; V7/V and #IVo7.

#IVo7 does not perform the same function as V7/V in the standard repertoire. Its most typical resolution is to the second inversion of the I chord (Imaj/5).5

And that’s exactly what we have here. F7 moving to C/G with #IVo7 used as a passing chord. To my mind the second inversion of the Imaj chord by having the 5 in the bass is standing in for the V chord. If that were the case we would normally consider using a V7/V secondary dominant but instead we use the #IVo7.

These progressions work because in each case the tritones in the diminished seventh chords collapse (or resolve) when we move to the target chords.

NB: It’s not the effect of collapsing tritones (tritone resolution) that makes this work. Rather, it is strong descending chromatic bass movement.

As an example of the use of a diminished as a passing chord in a descending progression take a look at the D section of All the Things You Are. The key is Ab so you can see that use of the diminished b3 chord provides descending chromatic movement in the bass as we move from the iii-7 to the ii-7. 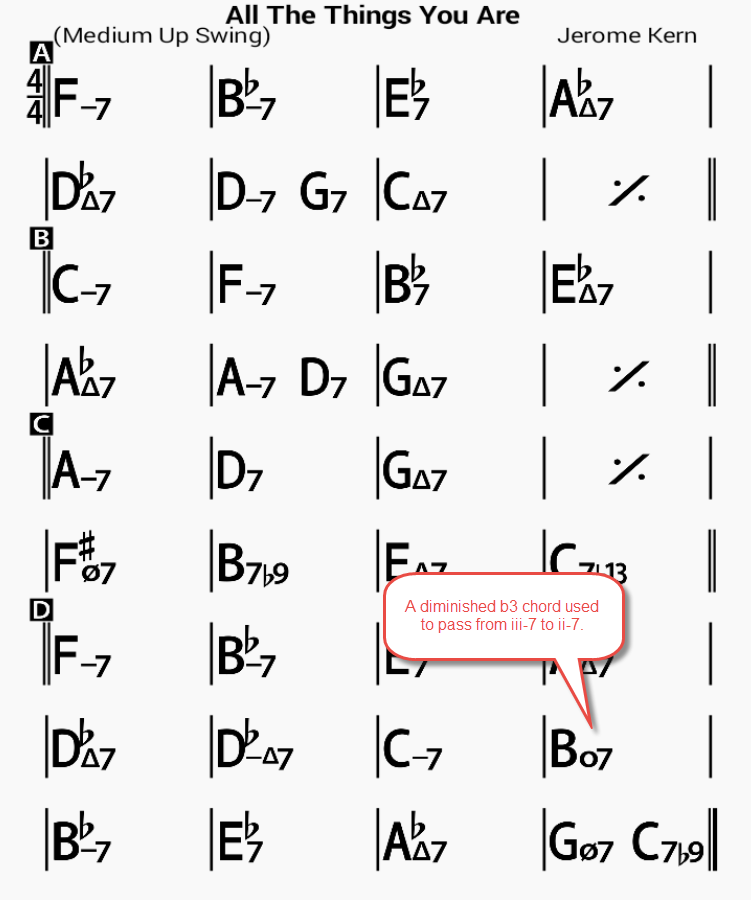 Auxiliary diminished chords are created by lowering the 3, 5, and 7 of IMj7 or V7. 7

A diminished chord with the same root note of the chord that it substitutes is called an auxiliary diminished.

The half-whole diminished scale has the following intervals:

The whole-half diminished scale gives us the following intervals:

The scale – whether half-whole or whole-half – lacks a key centre. In fact, Lavine notes that because the scale is symmetrical and therefore repeats itself there are really only 3 diminished scales in total:

Lavine reminds us that,

So, if we take the half-whole diminished scale and rather than thinking in terms of standard intervals we think in terms of chord tones and tensions we can rewrite the scale formula as:

The obvious implication of this is that there is a close relationship between the half-whole scale and 13b9 chord. Therefore we can use the half-whole diminished to play over a 13b9 or related chord (i.e. a dom7 chord with a 13 and a b9, #9 or b5). 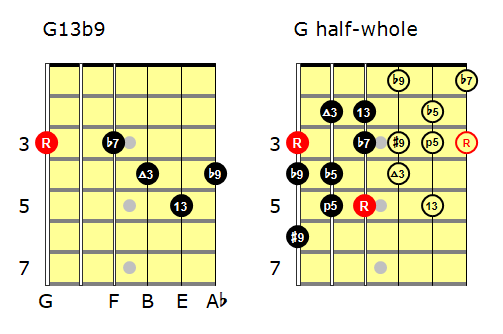 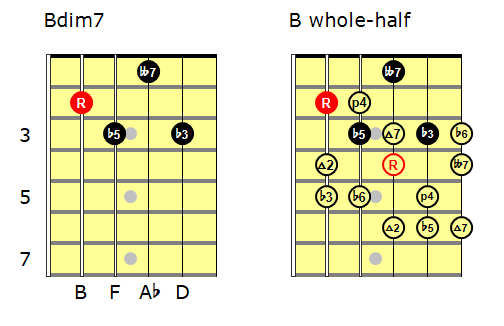 However, if we add a G (the b6 in relation to the B) in the bass and treat the G as the root we end up with a G7b9 chord. With a bit of rearrangement and adding the 13 it’s not difficult to see you can derive the G13b9 chord again. So, another way of thinking about a diminished 7th chord is to think of it as a 13b9 chord with its root a b6 below and to play half-whole from the new root. 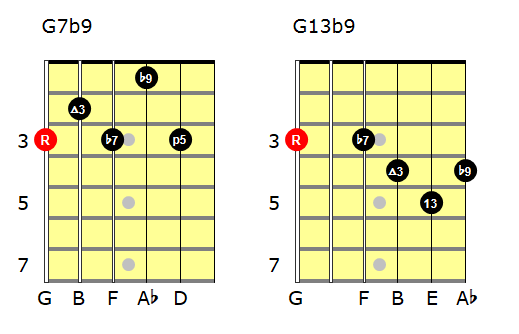 A final note from Mark Lavine:

Like melodic minor harmony, diminished scale harmony has no ‘avoid’ notes. As a result, everything harmonically contained within this scale is interchangeable: chords, voicings, lick, phrases, patterns, and so on. 10